PUEBLO, Colo. – 2016 World Champion Cooper Davis remembers all too well how difficult his gold-buckle campaign was five years ago. No matter where he looked, there was always another rider stepping up to challenge him.

Now that this season is four months complete, Davis expects 2021 to have a similar world title complexion later this year on Nov. 3-7 at the 2021 PBR World Finals in Las Vegas.

“Personally, I’d rather win one where I could get ahead and have a little bit of comfort, but I will take it any way I can get it, and we will just keep pushing forward.”

Davis won his first event of 2021 last weekend in Omaha, Nebraska, with a flawless 3-for-3 showing at the PBR Union Home Mortgage Invitational – highlighted by a winning 92.25-point ride on Trail of Tears in the championship round.

The victory pushed Davis right on the heels of world No. 1 Jose Vitor Leme and No. 2 Pacheco in the world standings.

Davis is 123 points behind Leme heading into the Unleash The Beast off-weekend.

While Leme and current world No. 4 Vieira are competing this weekend at the WCRA Major Rodeo Corpus Christi, Davis was on his way to Galveston, Texas, to celebrate Mother’s Day weekend with his wife Kaitlyn, son Mack, mom Kim, and father Chad.

“My mom and dad did pretty much everything for me when I was growing up,” Davis said. “They paid for all the horses and sacrificed everything they had just so I could go to the rodeos. We got all the help we needed. Whatever schools I wanted to go to, my mom was making sure it could happen. She was a big part of that, and she continues to be at every Finals I have had and goes to events whenever they can.

“I couldn’t have been any luckier.”

Davis has an extra level of appreciation and love for his mom now that he, too, is a parent.

“It has to be really hard being a mom, and because before I had a kid, I didn’t know all the things you worry about as a parent,” he said. “Your mom is always worrying about you still to even this day. It has to be tough.”

The break in the Unleash The Beast schedule could not have come at a better time for Davis as he gets some time to rest his nagging thumb/riding hand injury, as well as some other bumps and bruises that have popped up this year.

“It is just nagging on me,” Davis said. “It is something I am going to have to deal with. That brace has definitely helped a whole lot. Bulls in the 15/15 that really jerk on you are the ones that get to you. Everything else is fine. Bulls that go away from your hand and get really steep, that is a little more pressure on my hand. Other than that, it is something I definitely can deal with.”

For the most part, it has been hard to notice the thumb being an issue for Davis. The only sign of him really feeling the effects of the injury recently was during the 15/15 Bucking Battle in Omaha, when he turned down a re-ride option following a 78.5-point effort on King Brute. It was only the fourth time in the past three seasons in which Davis turned down a re-ride.

Coincidentally, the ride was the 200th of Davis’s career on the premier series.

Davis’s effort on Trail of Tears was critical as he was able to leapfrog Leme in the event standings and prevent the reigning World Champion from notching his third win of the season.

“That is my favorite thing about Davis: how competitive this guy is,” two-time World Champion and CBS Sports Network analyst Justin McBride told Craig Hummer. “He wants to compete for another world title.”

Omaha was the second weekend in a row that a previous World Champion passed Leme in an event. Pacheco jumped ahead of him in Nampa, Idaho, two weeks ago.

The Top 5 riders in the world (Leme, Pacheco, Davis, Vieira and Dener Barbosa) are all separated by less than 290 world points. The UTB next heads to Billings, Montana, on May 14-16 for the PBR Wrangler Invitational, presented by Cooper Tires.

“That was really big,” Davis said. “I switched ropes the weekend I got knocked out (in Sioux Falls), so I switched back, and this weekend, everything went back into place. I just felt more like myself. Jose is riding good. Kaique has been riding good. Joao. All those guys always ride good, but they have been on another level this year.”

Davis has also evolved his game during his seventh season on tour.

The 27-year-old’s ride on Trail of Tears was his fifth 90-point ride of the season, one off from his 2019 career-best of six.

Davis said he has not necessarily changed anything with his riding this year. Instead, the 2015 PBR World Finals event winner has made it a priority to make sure he leaves the chutes properly and is simply growing into his riding more and more. 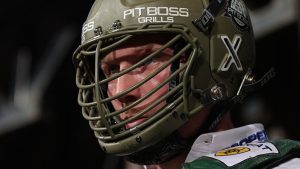 “I think I have been 90 on more bulls to the left than I have to the right, which is odd for me,” Davis said. “The longer I have gone in my career, the better I have gotten on bulls away from my hand, especially those that buck hard. That has been the difference this year and last year when I came back. Bulls like (Marquis Metal Works) Bill the Butcher and stuff like that that were probably not going to fit me years before. Lester Gillis. I found ways to get by them. I have always rode a little more centered than other guys away from their hand.

“Once I figured out how to get in that sweet spot a little better, it has been good.”

Chase Dougherty wins Round 1 in Billings

Freedom in control of its destiny as team vies for first-round bye...

WCRA ANNOUNCES NOMINATION SEGMENTS WILL NOW BE OPEN FOR A SIX-MONTH TIME...