Competitors were at the top of their games on Saturday, March 5, as they vied for the top four spots in each RODEOHOUSTON Super Series event.

Tyler Mulligan roped his way to the top of Super Series II with a time of 7.8 seconds in the third round.

“It’s just a great, big rodeo, so you just have to focus on getting the job done,” Mulligan said.

Advancing to a Semifinal Round

Team dynamics worked well and sent the duo of Tyler Waters and Tyler McKnight to the Semifinal.

“We have both just been doing this for so long. Timing fell together, and we became partners,” said McKnight.

Advancing to Semifinal Round:

“The atmosphere and hospitality of Houston is great, and it was one of the first big rodeos I was able to come to,” said Wright.

JD Struxness fought his way to the top as he secured his position in the Semifinals.

“My hazer was a huge part of my success tonight from running beside the steer to lending me his horse,” said Struxness.

Kelley Carrington raced around the barrels for the victory Saturday night.

Trevor Kastner held tight to the first-place position to advance to the Semifinals.

“Winning the Super Series is great,” said Kastner. “It gives you the chance to win the whole Rodeo.”

The second round of Breakaway Roping, a new event at RODEOHOUSTON in 2022, was held Saturday, March 5. Shelby Boisjoli took the win, with a 2.6 second run.

Advancing to the Semifinal Round

The Houston Livestock Show and Rodeo promotes agriculture by hosting an annual, family-friendly experience that educates and entertains the public, supports Texas youth, showcases Western heritage and provides year-round educational support within the community. Since its beginning in 1932, the Rodeo has committed more than $550 million to the youth of Texas and education. The 2022 Rodeo continues through March 20. For more information, visit rodeohouston.com and connect with #RODEOHOUSTON online via Facebook, Twitter, Instagram and YouTube for all the latest news. 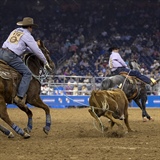