Deer hunting season is right around the corner. If you’re a fan of the outdoors and are looking forward to the start of the season, you’re not alone: about 8.1 million people hunt deer annually.

It’s no surprise that the men of rodeo and NASCAR are among that group. While they might be busy throughout the spring and summer, they have a bit of a break in the fall and winter where they can hunt whitetail and other game.

But it’s not only hunting these three have in common. They’re all enthusiastic supporters of Sportsman’s Choice ® Record Rack’s Sportsman Choice deer feed and are avid supporters of the company’s Bucks for the Brave initiative, which brings together veterans and first responders for the hunting trip of a lifetime. 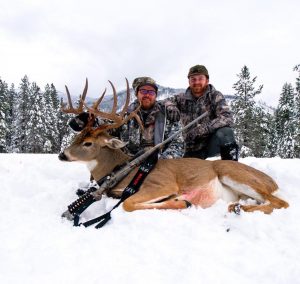 As with many hunters, all three started hunting at a young age. They went out with their fathers and have fond memories of their earliest excursions into the wilderness.

“Growing up in Missouri, outdoors were a big part of my life, hunting and fishing. Hunting whitetail deer is a big part of the lifestyle of Missouri,” Boyd says. “My grandparents had a farm, and my dad hunted all the time. So for me, hunting started out at probably four or five years old.”

Boyd got his first six-pointer, which he says should have been an eight-pointer, when he was 11 — an impressive animal with a 21.5-inch spread between the antlers.

Hass also started young in his hometown of Terrell, Texas. “Growing up in Texas, we mainly hunted whitetail, with feral hogs and ducks, too. I was seven when I harvested my first deer,” says Hass.

Eldridge is a lifelong hunter, but it’s only over the past few years that his love for hunting developed into a true passion.

“‘I’ve always had a pretty strong predator gene in me, from shooting squirrels out on my grandma’s ranch or shooting stuff with a slingshot,” Eldridge says. “Growing up, me and my dad hunted, and we would harvest a few deer and a couple of antelope when I was a kid.” 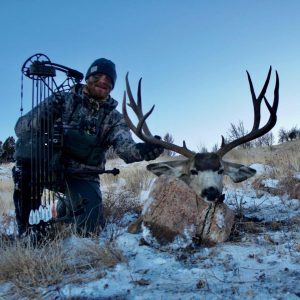 As he got busier with rodeo, it was harder for him to find the time to journey into the outdoors. But, once his rodeo career was on track, he felt the itch again. He found himself hunting elk with Mike Richie of Richie Outfitters in the Idaho wilderness, which boasts some of the best elk hunting in the nation.

“Ever since that trip in 2016, I’ve just been crazy about it,” he says. “I still love getting a nice trophy and getting the meat on the table, but at the same time, I get huge enjoyment out of either taking a client to get an animal or helping the veterans down there, seeing them enjoy the great outdoors and see those animals so close, and connect with nature.”

Giving Back to Those Who Give Their All: Bucks for the Brave 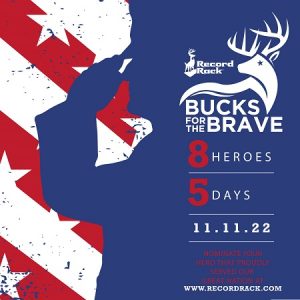 The veterans he speaks of are those who partake in Bucks for the Brave, an initiative developed by Record Rack to honor veterans, retired military, and first responders. Eldridge, Hass, and Boyd are all involved with the program.

Bucks for the Brave honors those who have put their lives on the line in service of our country. In many cases, these brave men and women have had experiences the broader population can’t even begin to imagine. Although Americans take time to celebrate their sacrifices on Veteran’s Day, the Sportsman’s Choice Record Rack team wanted to do even more to honor them.

That was the genesis of the initiative, which grants discharged veterans and retired first responders, including law enforcement, firefighters, and EMTs, the opportunity to go on the hunting trip of a lifetime. Record Rack selects one winner from each category: Air Force veteran, Army veteran, Coast Guard veteran, Marine Corps veteran, Navy veteran, retired law enforcement, retired firefighter, and retired EMT. Nominations were due on September 11, but those interested in nominating someone for next year’s event can sign up for the Sportsman’s Choice mailing list for updates on the application process for 2023. 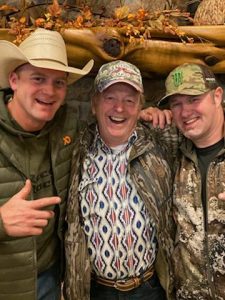 The next hunt takes place on Veterans Day weekend, November 9-13, 2022, at Trinity Oak’s Thumbtack Ranch in Batesville, Texas. Selected participants have the chance to hunt alongside one another and also get to meet and hunt alongside some of the company’s sponsored athletes across rodeo and NASCAR.

Boyd, Hass, and Eldridge have all participated in Bucks for the Brave as special guests. For each of them, it’s been a profound experience that strongly impacted them. As each of these men speaks about their experiences, it’s hard not to take note of the emotions behind their words.

“Some of these guys have been through some wild, wild situations,” Boyd says. “And they’re heroes. I’m just chasing a dream, driving a racecar, and here I am sitting with these guys that have accomplished so much and gave so much for so little. It’s a pretty humbling experience. By the end of it, you feel like family.”

This year will be his fourth year returning to the event. “It’s always something I look forward to,” he says. “I really had no idea what to expect my first time. And then, after a couple of nights in, I caught myself tearing up and listening to these stories and just getting to know these heroes.” 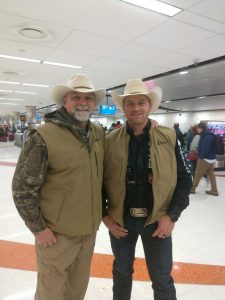 “I’ve had grandfathers and family members who have been in the military. And I understand what they’ve talked about and experienced,” says Hass. “Then, to be able to go in firsthand with the selected few people that get to go on the hunt, when we sit by the campfire, and actually talk about more in-depth of what they went through — you appreciate what people laid on the line and that they put their lives out there for our country, and for me and my family as well.”

Eldridge says that when he first heard about Bucks for the Brave, he knew he wanted to get involved immediately.

“I’m very blessed to do what I love for a living. And so when I can give back, I do, because I wouldn’t have those freedoms if it weren’t for those veterans out there and those first responders out there fighting every day for us,” he says.

“Those guys impacted my life so much because they did so much for our country, and it’s just amazing. I just have a deeper respect for them the more I go, and the more veterans I meet and learn about their sacrifices,” Eldridge says.

Sportsman’s Choice Record Rack: “The Best on the Market”

None of these adventures would be possible without Sportsman’s Choice, which offers a complete line of products and feeds so landowners can grow bigger, healthier deer throughout their land.

The Record Rack line includes an array of products to help promote growth, such as nutrition-filled nuggets, deer treats, breeder pellets for areas where the deer are in short supply, and flavored deer corn that provides energy to the local deer population.

Hunters can take advantage of these products by establishing mineral sites in the early spring. Once deer discover a location where they can consistently find treats and nourishment, they’ll visit throughout the spring and summer months, meaning they’ll be in excellent health once deer hunting season rolls around.

Boyd was such a fan of the product that he took the initiative to reach out to Record Rack about working together, which is also how the company made its first foray into NASCAR.

“We were able to put a pretty organic partnership together, just from me using the product and saying, ‘Hey, like, I like this. I think NASCAR fans would like this, and you haven’t been in the sport before.'” Boyd says.

“When you go down to Trinity Oaks, you see the antler growth those deer have, their coats are glossy, and they’re fat. It’s crazy to see deer that healthy,” Eldridge says. “They showed me a picture of a buck the year before and then the buck next year. It was like, ‘Holy cow!’ The overall growth and quality of the deer is just unreal.”

“It’s the best on the market,” Hass says. “I have some kinfolk involved in raising deer and high-fence hunting. It’s pretty crazy what they have witnessed as far as the growth of the deer and the protein, and as far as growing better deer and better horn for their business.”

Hunting Season on the Horizon

Hass is making sure to keep the hunting tradition in the family, starting with his 10-year-old daughter. “I got her started shooting archery, and I’ve taken her out a few times,” he says. “She hasn’t harvested anything. If hunting is something she wants to take a step into and do, then that’s something that I’ll let her do. And if she just wants to learn how to shoot, that’s okay as well.”

He also has plans to do some pheasant hunting and will hunt whitetail in South Dakota. Come November, he’ll head to Colorado to hunt elk.

Meanwhile, in addition to returning to Trinity Oaks with Bucks for the Braves, Boyd looks forward to hunting with his father in Texas for the first time. “We haven’t gotten to hunt in Texas together. We’ve always hunted in North Carolina and Kansas, kind of close to home out here in the Carolinas,” he says. “So we’re excited to go get on some big bucks down there.”

Eldridge is looking forward to the opportunity to return to elk country. 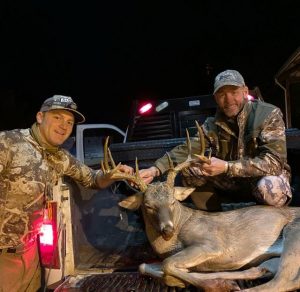 “We rodeo till the middle of September, and that’s usually when the elk are starting to bugle and stuff. And so I’m headed back into that,” he says. After Bucks for the Brave, he’s also planning another big trip with some of his fellow rodeo athletes. “I’ll be doing a Coues deer hunt in Mexico with Hunt Warz,” he says. Hunt Warz will record video of the excursion and release it as part of a competition-style YouTube show. “The bigger the deer you get, the more points you get,” he says.

Like millions of other Americans, all three men are looking forward to enjoying everything the season offers them. To learn more about Sportsman’s Choice feeds, Record Rack, and Bucks for the Brave, visit the website at www.sportsmanschoicefeeds.com. 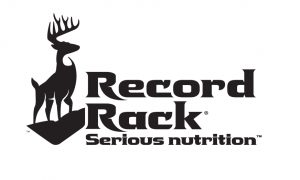