The American Spirit: American Barrels is a Modern Icon of Classic American Identity

Fans of American Barrels don’t drink it just because the bourbon is great or the bottle looks cool. They drink it because of what that bottle means.

Indeed, with its sleek bullet shape and coiled Gadsden rattlesnake, the bottle stands out among popular mainstream whiskey brands.

But more than just a powerful, eye-catching design, the bottle functions as an emblem of new American patriots. It represents great bourbon, great loyalty, and great pride.

The bottle is an insignia of American cultural identity rooted in her heritage, setting the foundation for a brand name people will recognize centuries from now. It portrays a powerful message, one evident in both the visual aesthetic and the bourbon inside the bottle. Taken together, this represents a taunting “Come and take it” attitude toward the challenges of daily life.

Like the Marlboro Man or John Deere green, the American Barrels bottle is a depiction of something that goes far beyond a fine a product. As a whole, the brand speaks to a reflection on a time and a place, taking historical elements and building on them to present a modern symbol of virtue.

The images that most truthfully reflect the American ethos aren’t the ones that were carefully created in labs, fueled by focus groups and marketing studies. They’re the ones that rise organically and come to embody people’s true sense of being. These brands are revered for their uniqueness and grow on their own merit. Eventually, they become iconic as people recognize themselves within the context of what the brand stands for.

“Thirty years from now, who is going to be today’s Marlboro Man?” he ponders. “It’s the same person, but with a modern sense of style and appeal.” 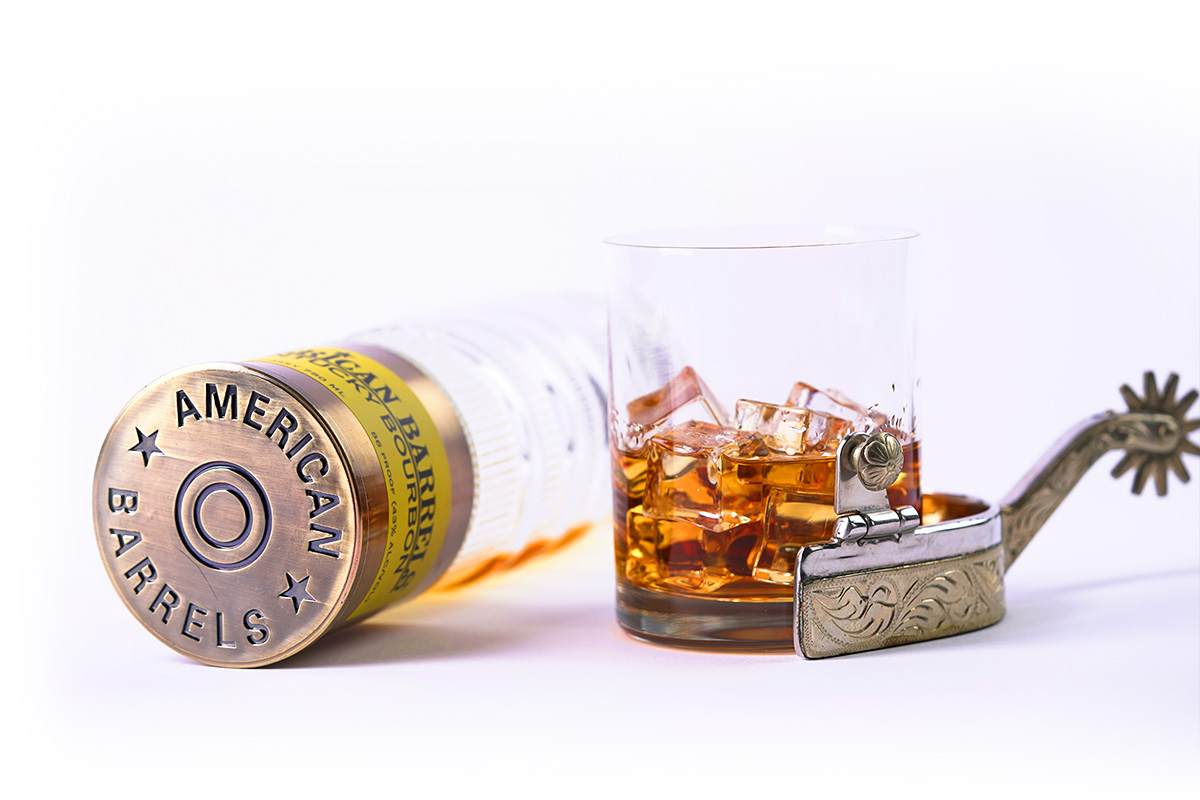 By its grassroots nature, the American Barrels brand is an expression of that identity.  The bottle, and the imagery therein, stands for far more than a cool party favor or conversation starter. There is a much deeper meaning.

No doubt, people who drink it do so because they love its flavor. Carefully crafted with a specific flavor profile in mind, the result is as much a product of design ingenuity as the bottle itself. The high-rye mixture has the classic Bourbon notes of caramel and vanilla, along with a dark cherry finish. It then culminates in a smooth burn, making it a versatile choice suited for anything from a wild night at the rodeo to a relaxing evening at home.

“Sometimes people say, ‘Wow, you spent so much time on the bottle and the branding. Did you spend any time on the whiskey?’ And I say ‘Yeah, we just worked overtime.’” Reed says.

“Overtime” might be an understatement. The American Barrels brand of whiskey as it stands today is the calculated result of years of hard work and planning. And, with the company’s recent move to a new home on the Kentucky Bourbon Trail, the whiskey has only gotten better. The move came with process improvements that now allow the American Barrels team to control distilling from start to finish. It’s available at a reasonable price point that gives whiskey drinkers the most bang for their buck.

But still, it’s what that bottle stands for that inspires that first taste. In an era of liquor bottle designs that rely on label gimmicks such as glitter and gemstones to earn customers’ fleeting attention, American Barrels stands out as an authentic.

Reed and his team didn’t create the bottle as a result of focus group testing or marketing surveys. Instead, it was a response to a simple observation on whiskey in American culture. And that observation warranted a response, which took on a life of its own.

While attending Indiana University, located in the heart of Bourbon Country, he noticed his classmates’ propensity to celebrate major events and milestones with a popular brand of Canadian whiskey. It seemed disingenuine, to say the least, to commemorate these moments with an imported whiskey from a crown-shaped bottle in a land that refutes the idea of kings.

The result would lead him to dream up something that he felt would present a stronger message, grounded in an authentic representation of American heritage.

“My very first line for it was ‘American Barrels: Shots for liberty since 1775,’” Reed says, noting the double entendre for shots from a whiskey barrel as well as shots from a gun barrel.

And so, American Barrels emerged as the antithesis of that inauthentic sentiment. Instead, the whiskey is a symbol of a shared, inherited identity, one that calls upon the nostalgia for classic Americana.

“Because if you see it, and it’s for you, you’ll know,” he says. “If it was in a generic bottle, then it loses its specificity. But we didn’t design it just to stand out for the sake of standing out.”

It would then seem only fitting that the ornate bottle would draw influence such a powerful and meaningful statement. Created in 1775 by General Christopher Gadsden, the Gadsden flag, with its distinct rattlesnake imagery, is a symbolic representation of the Revolutionary War. The flag, bearing the famous slogan “Don’t tread on me,” took on a life of its own as it became a symbol of vigilance and magnanimity, patriotism and liberty.

For many, the term “American spirit” conjures stories of America’s founders, with an emphasis on the types of historic moments likely to be recounted in grade-school textbooks. And while those historical markers certainly represent that spirit, the American spirit itself is actually something far more profound than that.

“That American spirit to me is an inherited history. It’s an identity and destiny of a special nation and its land,” Reed says. “To claim it or to have true American spirit is to share ownership of our people’s heritage, and our duty to defend it, to perpetuate it.”

That’s not to say someone can classify an American Barrels drinker by demographics like age or gender.

“It’s for specific people, but lots of different types of people would fit in that group,” Reed says.

Put another way, it represents a shared sense of pride that transcends those boundaries, reflecting instead a unified people who stand for American values.

“The American spirit is the people itself,” Reed says.”This bottle is that badge for our folk, the people who we made it for,” he says. “It’s not for everyone.”

A sentiment reinforced by the slogan, “Dare to live free,” the American Barrels brand serves as a calling card to those who want to make a statement.

“People that drink American Barrels drink it for more than just the whiskey,” Reed says. “It’s something that announces that ‘Come and take it’ attitude for preserving the American spirit. That’s the history, identity and destiny of the American people.”

American Barrels Kentucky Bourbon is available at retailers throughout the country and online at www.americanbarrels.com.

American Buckle Magazine Releases Their 2021 World Finals Edition And How You...