CORPUS CHRISTI, Texas –In front of an electric crowd inside the American Bank Center in Corpus Christi, rodeo athletes from across the globe were crowned champions and walked away with upwards of $553,000. The Triple Crown of Rodeo Round saw three TCR eligible athletes enter the TCR Round, where all of the eligible athletes for the $1 million bonus were eliminated.

The Triple Crown of Rodeo is an annual bonus that pays a $1 Million cash award to any one athlete or collection of athletes who win first place in any three consecutive WCRA Major Rodeos.

Breakaway Roping had the fans inside American Bank Center on the edge of their seats throughout. The 2020 Women’s Rodeo World All-Around Champion Jackie Crawford (Stephenville, TX) delivered a powerful performance when her string broke away from her saddle horn at 1.82 second mark in the Triple Crown of Rodeo round Saturday night. After notching the fastest time in the Triple Crown of Rodeo round, Crawford was joined in the box by Bradi Good (Abilene, TX) who had a 2.14-second run, and Jade Kenney (Canyon, TX), who received a no-time. This is Crawford’s second WCRA Breakaway Championship. In January 2019, Crawford made history when she championed at the WCRA Windy City Roundup winning more than $52,000, setting the record for the then largest payout ever for a single event in the sport at the time.

Riley Duvall (Checotah, OK) was unstoppable in the steer wrestling where he notched the one of the fastest times of the week in the event. The 4x NFR qualifier recorded a 4.70-second run in the TCR Round, prior to delivering a lightning-fast 4.15-second effort in the TCR Round. The victory is Duvall’s first WCRA Major win. Duvall walked away with $15,000.

As the Saturday evening event continued, a hotly contested race in the tie-down roping began to unfurl. The 3x WCRA 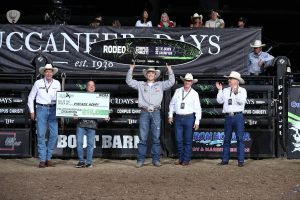 Champion Riley Webb (Denton, Texas), Kincade Henry (Mt. Pleasant, Texas), Jaxon Clegg (Coweta, Oklahoma) entered the TCR round edging each other’s showdown round times within the tenths of second. Calm and collected, Henry remained controlled as she backed into the roping box as he readied for what would be a career defining moment. The Texas cowboy ran his fastest time of the week with a 7.44-second time to defeat the defending Rodeo Corpus Christi Champion and Triple Crown of Rodeo Contender, Riley Webb.

After Chad Rutherford (Lake Charles, LA), RC Landingham (Hat Creek, CA) and 3x world PRCA World Champion Tim O’Connell (Zwingle, IA) advanced to the TRC Round with high 80+ scores, the trio quickly became immersed in a shootout for the $15,000 Major payday in the TCR round. Outscoring O’Connell, the victor from the 2021 Cowtown Christmas 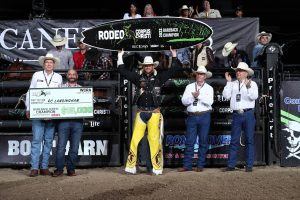 Championship Rodeo who was seeking his second win in the Triple Crown, by 4.5 points, Landingham delivered a critical 87-point ride on Vegas Confused to capture the victory.

Halyn Lide (China Springs, TX) won the barrel racing courtesy of her 14.368-second run in the showdown round, and 14.399-second in the TCR round, both the top scores in the rounds. Lide topped Ari-Anna Flynn (Charleston, AR) 14.419-second time in the TCR round.

After 7x PRCA World Champion Sage Kimzey (Salado, TX), Deklan Garland (Foster, OK), and Wyatt Rogers (Locust Grove, OK), did not cover in the Triple Crown of Rodeo Round, there was no champion crowned.

On Sunday, June 5 fans will be able to tune into Rodeo Corpus Christi on a CBS network broadcast.

All results from the event can be found here.

WCRA is a professional sport and entertainment entity, created to develop and advance the sport of rodeo by aligning all levels of competition. In association with the PBR, WCRA produces major rodeo events, developing additional opportunities for rodeo-industry competitors, stakeholders, and fans. To learn more, visit wcrarodeo.com. For athletes interested in learning more about the WCRA Virtual Rodeo Qualifier (VRQ) system, visit app.wcrarodeo.com.

Tacy Webb Makes Her Way to Corpus Christi for a Chance to...

WCRA ANNOUNCES NO. 1-SEEDED LEADERBOARD ATHLETES ADVANCING TO THE SHOWDOWN ROUND OF...

American Buckle Magazine Releases Their 2021 World Finals Edition And How You...