It’s been an eventful year for Shane Hanchey, the 12-time NFR tie-down roping finalist who finished first in the 2021 PRCA regular season. Between marrying barrel racer and breakaway roper Taylor Jacob (now Taylor Hanchey), growing his cajun food trailer business and hosting the biggest Shane Hanchey Invitational rope-in to date, it’s hard to imagine how he also has time for a rodeo career, too. 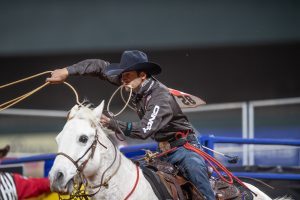 But an old adage says that if you want something done, give it to a busy person. That seems to be the case with Hanchey, who dominated the season with wins at several major rodeos. He took first at The American (Arlington, Texas), known as “the world’s richest weekend in western sports,” and other big wins included The Pendleton (Ore.) Round-Up and the World’s Oldest Rodeo (Prescott, Az.).

“I think when I look back on this in 10 or 20 years when my career’s done, I could probably say this was the best year I’ve ever had, start to finish,” Hanchey says. “I’m hoping we can finish it off in December.”

A Strong Start and a Steady Season

Things seem only to be getting better for Hanchey. He’s been on a roll ever since last year’s NFR when he won the NFR average title with 83.1 seconds on ten head to land third place in the world standings. This year, he’s looking to take home a second NFR World Champion buckle, after securing his first one in 2013.

After coming off of a challenging 2020 PRCA season heavily disrupted by the COVID-19 pandemic, this year’s early-season win at The American back in April gave him an early boost in the race toward a world champion title. Event winners at The American earn $100,000, though only half counts toward the PRCA world standings.

“It gave me a lot of confidence and a lot of momentum headed into the spring and summer,” he says.

As of the end of the regular PRCA season, more than $40,000 in earnings stand between him and second-place Westyn 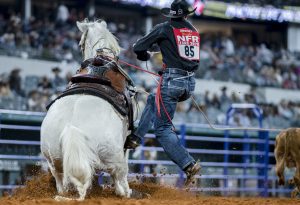 Hughes. But as rodeo athletes know, there’s no telling what could happen at the finals. With this year’s NFR payouts totaling $13.3 million, including $26,997 for round winners and $69,234 for average winners, the title could come down to a single round.

If Hanchey can repeat his 2020 NFR performance, there’s no cause for concern. Given that this is his 12th event, it helps that he knows what to expect.

“It’s pretty taxing for those ten days, so I’ve got to be ready mentally and physically,” he says. “At the end of the day, when the first round starts, I’ve got to be mentally sharp and strong and ready for anything that comes at me.”

Bringing People Together Through Food and Festivities

Though it takes a lot of work and discipline to become an NFR world champion contender, Hanchey still finds time to pursue other passions. Among the biggest is Bo’s Boil N Geaux, the food trailer he and his wife operate on the weekends throughout the height of crawfish season in Giddings, Texas. The truck keeps them busy in the spring and early summer.

Through Bo’s, Hanchey pays homage to his Louisiana heritage by introducing Texans to the unique flavors of the bayou. Offerings include bags of crawfish and steamed shrimp, along with dishes like gumbo and crawfish etouffee.

“I love being from Louisiana. I love everything about it, whether it’s the food or the college football or the people,” he says.

He notes that people from Louisiana have been through a lot in recent years, including several major hurricanes and severe flooding. But in the face of such obstacles, the people have persevered.

“It makes me feel good to be from there. If I can generate anything from that in dishing out some cajun food to my Texans, that’s what it’s all about,” he says.

That community-minded sentiment is a recurring theme in Hanchey’s life. Every fall, he brings the roping community together for the Shane Hanchey Invitational. The event, which also takes place in Giddings, displays some of the best roping in the world.

“It’s a rope-in, but it’s really more of a party, festival atmosphere,” he says. “We get a lot of people who come in for the weekend, and we watch college football and enjoy the company.” 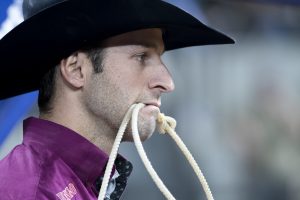 Now in its 13th year, this year’s event included both breakaway roping and tie-down roping. For the tie-down event, Hanchey invited all 15 of the year’s NFR-qualifying calf ropers along with previous NFR world champions. The tradition dates back to his high school days, but the celebration continues to grow each year.

“I mean, it sounds cliche, but it gets better and better each year. It gets bigger each year. Guys win more money than they did the year before,” he says.

Of course, he doesn’t do it all on his own. His wife plays a significant role in putting on the event as well, and he brings on a manager to handle some logistics. Still, it’s a lot to take on, with the preparations taking place during the summer and fall months, some of the busiest of the PRCA season.

“It’s a six-month process from planning the event to hosting the event and then wrapping it up. There’s a lot that goes into it,” he says.

Tying a Different Kind of Knot

Perhaps it’s no coincidence that one of Hanchey’s all-time best years comes the same year he married Taylor. Whether it’s wedded bliss or just good timing, they’re both having incredible years.

“It’s funny that since we got married, both of our careers have taken off,” he says.

After reaching the top 15 in both barrel racing and breakaway roping, Taylor became the first woman to ever qualify for two Pro Rodeo finals events in the same year.

It’s all been a wild ride for Hanchey, whose earliest ambitions didn’t involve horses or ropes. Instead, he wanted to play baseball. But during high school, he grew serious about calf roping. He eventually told his baseball coach he planned to quit the sport to pursue rodeo. The coach told Hanchey it was the dumbest thing he’d ever do.

But Hanchey had the last laugh. A long list of career successes and more than $2 million in lifetime earnings show he made the right decision, and it all came full circle.

“He’s the principal of my old high school now. Long story short, he’s one of my biggest fans,” says Hanchey. “He understands the decision I made and he thinks it was totally worth it now.”

It’s easy to see why the coach may have opposed the idea. Many young people embark on rodeo careers without understanding the personal sacrifices involved in making a living from riding or roping. Hanchey himself sees this in some of today’s younger athletes.

“The biggest question I get asked by the youth is ‘How do I get sponsors?’” he says. “You get sponsors by winning and being presentable. It’s not by going around and asking how you get sponsors.”

Those sponsors represent yet another vote of confidence for him as the NFR approaches. Regardless of what happens at the Thomas and Mack, 2021 will always be a year for Hanchey to remember.

“I would be understating if I said it was a good year,” he says. “It’s been a great year.” 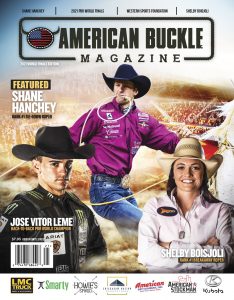